It is Often Used to Describe a Transient Fault that Corrects Itself – KINGBASTARD from Andrew Logie on Vimeo. From the Album A Sudden Instance of Malfunctioning or Irregularity in an Electronic System, 2014. kingbastardmusic.com ©2014 Music: Chris Weeks Video: Andrew Logie

I decided to take the techniques I’ve been working on so far a bit further by experimenting with integrating an Xbox Kinect camera to control graphics and sound. There are several ways that it is possible to control both visuals and sound using the Kinect 3D depth sensor and Mac. The options that I’m exploring are 1) Delicode z-vector 2) Synapse and Quartz Composer 3) Controlling Ableton Live and MIDI. Today I’ve been exploring the first option and ended up creating the above video as I was really inspired by the software. 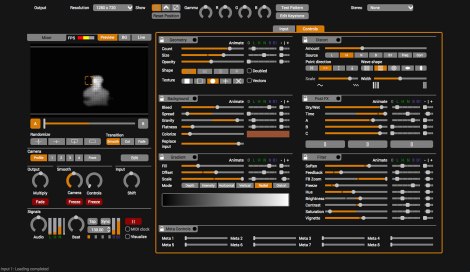 The key advantage of using an Xbox Kinect camera to record movements and objects is that it does not record video in a traditional sense, but rather 3D data. This 3D data can be manipulated after recording to manipulate the camera angle in post and apply a range of effects to the data. The Kinect has to be a 360 version and requires a AC and USB adaptor (which can be bought separately online) and a pretty powerful Mac. I was using a Retina Core i7 MacBook Pro with 1gb graphics card and outputting to 720p.

As my idea is being developed in my sketchbook, I thought it would be a good time to start experimenting with ways of enabling my ideas. I will be discussing these in future posts on this blog. There are a whole range of ways this software can be applied to the work I am producing and look forward to exploring it even further. I was feeling particularly inspired and had a lot of fun producing a range of experimental animations and graphics.

Another key advantage of using the Kinect is that all of these graphics are created and manipulated live, enabling live audience interaction with the visuals. I am still developing the final form of the piece, but envisage using this technique within the work. Over the next few days I am going to explore using this technology further and how it can be integrated to control both visuals in Quartz Composer and sound in Ableton.