The current project is based around the theme of micro/macro and where we fit within bigger picture of our universe. It seemed pertinent to research these topics further, although I already have an interest in this topic. I happened upon the BBC Horizon documentaries during the course of my research, which focuses on trying to understand the scale of the smallest/largest things in the universe.

How small is the universe? 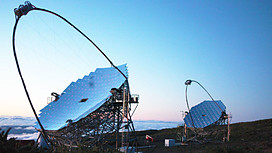 Horizon plunges down the biggest rabbit-hole in history in search of the smallest thing in the Universe.

It is a journey where things don’t just become smaller but also a whole lot weirder. Scientists hope to catch a glimpse of miniature black holes, multiple dimensions and even parallel Universes. As they start to explore this wonderland, where nothing is quite what it seems, they may have to rewrite the fundamental laws of time and space.

This programme has given me a whole wide variety of ideas to work with. It was stated in my last tutorial that the work I’m creating may be to literal visually, this documentary gave me a variety of ideas based around small abstract objects – that cannot be picked up with even the most powerful of microscopes. One of the elements that interested me most was “string theory” – in essence, the smallest form in the universe is made from small pieces of vibrating strings that hold atoms/matter together and therefore the universe. Certainly this documentary has given me some ideas for motion gfx/animations that I will create for the project.

How large is the universe? 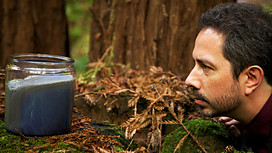 It is one of the most baffling questions that scientists can ask: how big is the Universe that we live in?

Horizon follows the cosmologists who are creating the most ambitious map in history – a map of everything in existence. And it is stranger than anyone had imagined – a Universe without end that stretches far beyond what the eye can ever see.

And, if the latest research proves true, our Universe may just be the start of something even bigger. Much bigger.

The second programme I watched goes hand-in-hand with the other episode of Horizon. This looks at the other end of the scale, how big is the universe? The programme again looked at some quite mind-melting concepts and ideas regarding the scale of the universe. The programme explored how scientists are mapping the entire universe (1/2 trillion stars in our galaxy alone!) and explored the possibility of multiple universes.

Again the programme has given me lots to think about and sparked off a number of ideas for looking at objects at this scale in a visual and non-literal way. I have explored some of these ideas (for both programmes) in my sketch-book, which I will upload at a later date.