It’s been a tough week! Whilst the animation has made good progress in some areas, other major technical problems have cropped up.

The set (pop-up book) is complete and looking fairly good. The characters are also complete bar a couple of final objects. Something I hadn’t really thought about was how to the pages together to create a book. After some experimentation I created a slightly larger cover from card and created a spine that was approx. the width of all the folded pages (0.5″). After trying a few different types of glue I had to use some spray mount, as PVA was likely to bend the card. It was worth the investment but expensive. Later I will create a more solid cover and bind the whole thing to create a more professional finish.

The next problem to overcome was the process of creating a hand-drawn animation in Tagtool (awesome iPad live animation tool) for each page, which is projection mapped onto the book, in sync with the sound (to be recorded on Friday 13th!), in 3 minutes! Each page takes approx. 15-20 minutes to draw and animate. The initial plan was to draw each page, record it in a more traditional format, speed up the video and sync the sound in post-production. 2 problems occurred with this technique: 1) It prevents the book from being used live 2) Recording the projection without distortion of the image. 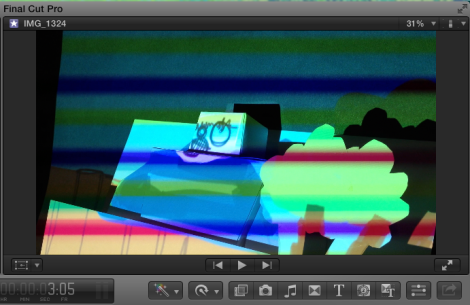 As you can see in the screenshot above serious distortion of the video occurs when recorded on a DSLR camera. I  used a Canon 600D to record the video, although I also suffered the same problems when using an iPhone. The distortion of image various in intensity, from above to less noticeable lines depending on the exposure.

The problem occurs due to the frame rate of the cameras and projectors not being in sync. The lines move up and down the screen. My previous project also suffered from this problem in the final recording, although less so. I tried various settings on the camera, but so far have found it impossible to record without the issue. As far as I know it’s impossible on modern cameras to remove this without professional equipment to synchronise the camera and projector video frame and refresh rates. This has been impossible to overcome, but in some respects may be beneficial in the long run as it has forced some major changes in the production, which in turn may be for the best. Suggestions are welcome if anyone knows a solution to the problem!

The decision was made to take the emphasis away from a traditional video recording of the work, but to focus on it as originally intended, which is a projected interactive pop-up book. It will be recorded, but just as evidence of a final interactive piece. After discussion with my tutor today during the final critique in January 2014, the animation will be performed and recorded using 16mm film on the day, which will hopefully also eliminate the flicker problem. A reel of film holds approx. 3 mins of film, just enough to record the piece. I also hope to make contact with a shadow puppet performer to perform the piece in time with the final animation and sound. It also enables me to focus on the creation of just the animation and sound and eliminates the worry of the production of a final professionally recorded video.

After experimentation with various techniques I intend to maintain the live hand-drawn animation that can be achieved using Tagtool. As mentioned previously each animation can vary in time to create, but certainly it would be impossible to produce the 10+ pages in the space of 3 minutes. The software has no save or record feature, so basically the animation has to be created live. Using a piece of software called Reflector (Mac/PC), you can send the screen of your iPad or iPhone to your Mac via Airplay on the same WI-FI network. Sometimes I use this whilst teaching and with students using Macs or devices to share work, it’s a handy tool. It also has a recording feature. I fed the signal of the drawing and animation to the software and recorded the animation, creating 20 – 30 minute videos for each page. Once recorded these videos were loaded into Final Cut Pro X and edited, the drawing and creation of each scene was then sped up approx. 1500% and key sequences of animations slowed down or played at real-time. A sequence of these animations were created, then the edited piece was played back and mapped onto the book. At this stage the animation is rudimentary and timing is all wrong.

Animation played back in real-time and projected onto book

Now both the major worries have been addressed I can concentrate on completing the animation and soundtrack. This seems to work well and produces good results, it works better as an interactive piece of animation rather than a video. Removing video from the equation allows me to use more colour and animation.

I’m still unsure whether to use the physical characters I’ve created. After the tutorial today I seemed to receive fairly positive feedback although I’m disappointed with the results so far. It was recommended I keep them in hence the suggestion of contacting a professional to help perform the final piece.

All being well, dialog recording will start tomorrow. With a soundtrack created I will be able to time the animation better. Fingers crossed all goes well!