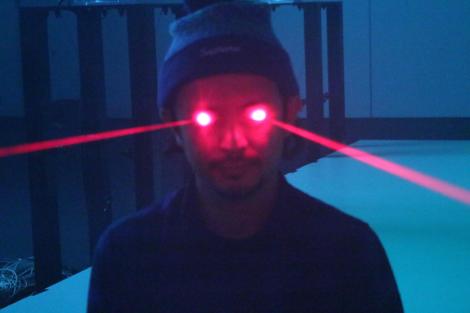 Daito Manabe is a Japanese artist, designer, programmer and VJ who crosses the boundaries of technology and art. He tends to use unconventional canvases, such as the human face, with his Electric Stimulus human face drum kit as seen below.

“He participated in various projects that made use of his programming skills, across a range of genres and fields. His face performance “Face visualizer, instrument and copy” has been invited by about 30 music/art/film festivals, such as at Sonar Festival (Barcelona) and Transmediale (Berlin) . He also devotes his energies to educational activities such as workshops in various countries, including at MIT Media Lab and Fabrica.” (Manabe 2014)

He combines sound and image in unconventional and innovative ways. He has used tools such as the Xbox Kinect and in the above video, the human face stimulated with electrodes with sound. In this piece Manabe creates “experiments (which) attempt to meld the human body with technology, looking at how it can be used in conjunction with ourselves, rather than a separate entity, creating a hybrid of man and machine. After all, the human body itself is a machine—an incredibly well-functioning organic machine.” (Holmes, 2010)

Another work which I particularly enjoy is the piece, Particles, 2012. In this piece, rather than using the human body as a canvas, this work is created by illuminated ping-pong balls. The rails which the balls move around on have integrated sensors which determine the speed and position of the balls and illuminate them accordingly. The intention of the piece was “utilize the 3D space without using holograms or 3D” (Sharaf, 2012). As you can see the results are amazing.

The final piece that stands out to me utilises similar techniques to ones I have previously explored, specifically projection mapping. Manabe collaborated with Nosaj Thing alongside a choreographer to create projection mapped, reactive visuals for the video. I really love the link between visuals and sound and the integration of the two together to create the final piece.